*All the pictures are for illustrative purposes only

Founded in Osaka in 1922, the OSK Nippon Revue Company, which celebrated its 95th anniversary this year, has been loved by people as one of the "Three Greatest Girls’ Revues" along with Takaradsuka Revue Company and Shochiku Musical Theater (SKD) since the days before World War II.

Their "Spring Dance", which was given birth in 1926, was widely popular as a seasonal event, and is now performed in Shochikuza Theater, Osaka, every year. While inheriting the tradition of OSK Revue featuring speedy and powerful line dance known as "Rockets", they have been constantly showing up-to-date performances. 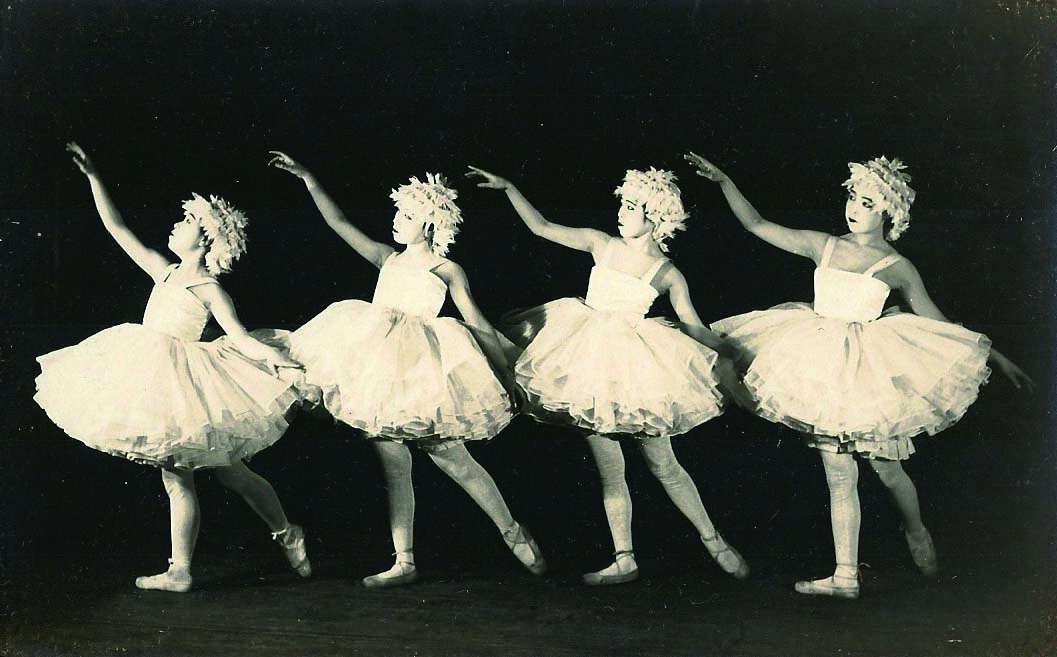 Founded as "Musical Division of Shochiku" in 1922

In April 1922, with the initiative of Matsujiro Shirai, president of Shochiku General Partnership Company (now Shochiku Co., Ltd.), "Musical Division of Shochiku" was founded as the exclusive dance group of Shochiku Theater, which was under construction at Dotonbori in Osaka at the time. The history of the OSK Nippon Revue Company, which has continued to the present day, started at this time.

Creative performances consisting of ballet, modern dance, Western music and Japanese dance by the girls disciplined at the training school got great popularity.

In 1926, "The First Spring Dance" in Celebration of the Third Anniversary of Shochikuza. The revues created on the basis of the traditional form of geisha quarter dance made great success and established the popularity of the Musical Division. 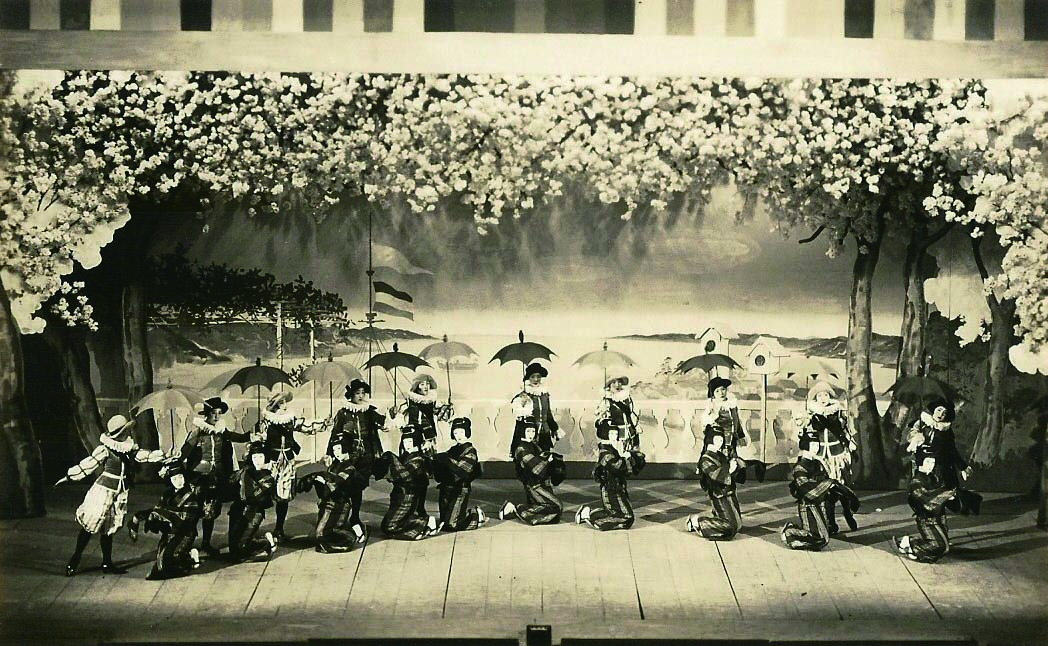 On the other hand, the "Dance of Spring" was loved by people as one of Osaka's seasonal events, and at "The 5th Spring Dance" in 1930, "Cherry Blossoming Country" (lyrics by Suifu Kishimoto), the OSK theme song, was created. In addition, “cherry blossom parasols”, which is now said to be indispensable to complete the OSK performances, was first adopted at this performance.

In 1934, the Osaka Shochiku Musical Division was renamed Osaka Shochiku Girls' Revue Company (OSSK), and its headquarters moved from Shochikuza Theater in Dotonbori to the Osaka Theater at Sennichimae, known as "Tai-Geki". OSSK revues grew even more spectacular and gorgeous on the stage of a huge theater known as the "Theater for Three Thousand People". Male role stars such as Harue Kashiwa and Arthur Misuzu, swing jazz sung by Shidsuko Kasagi and speedy tap dances gained popularity. 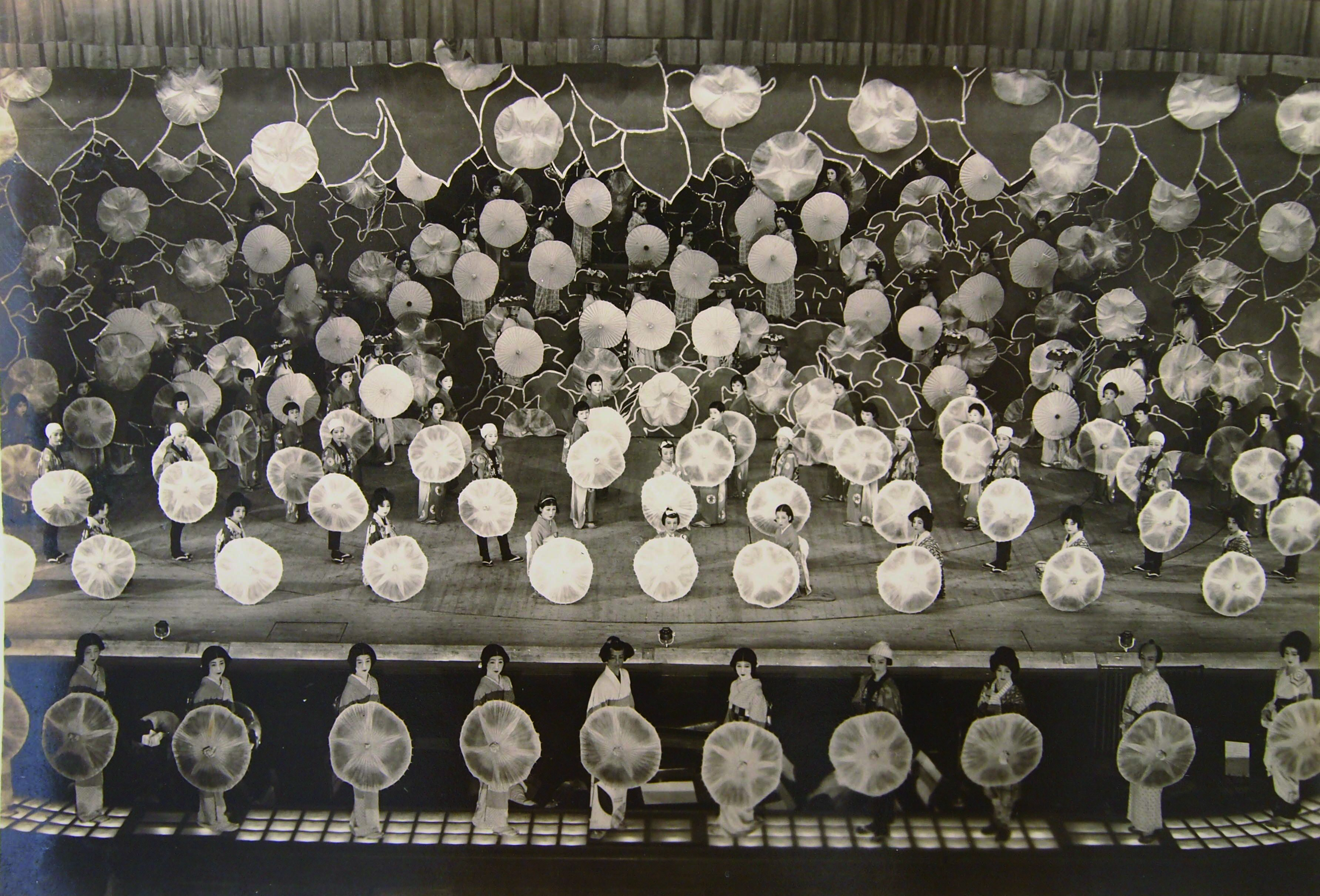 In the 1930's, the Golden Age of Revues before the World War II

Also in 1937, the line dance team "Rocket Girls" consisting of selected members rose to stardom with its perfect beauty and powerful dancing.

OSSK was renamed Osaka Shochiku Revue Company (OSK) in 1943. OSK continued its performance in Osaka, its home, while the war was becoming more and more intense and people were suffering from the damage caused by air raids. 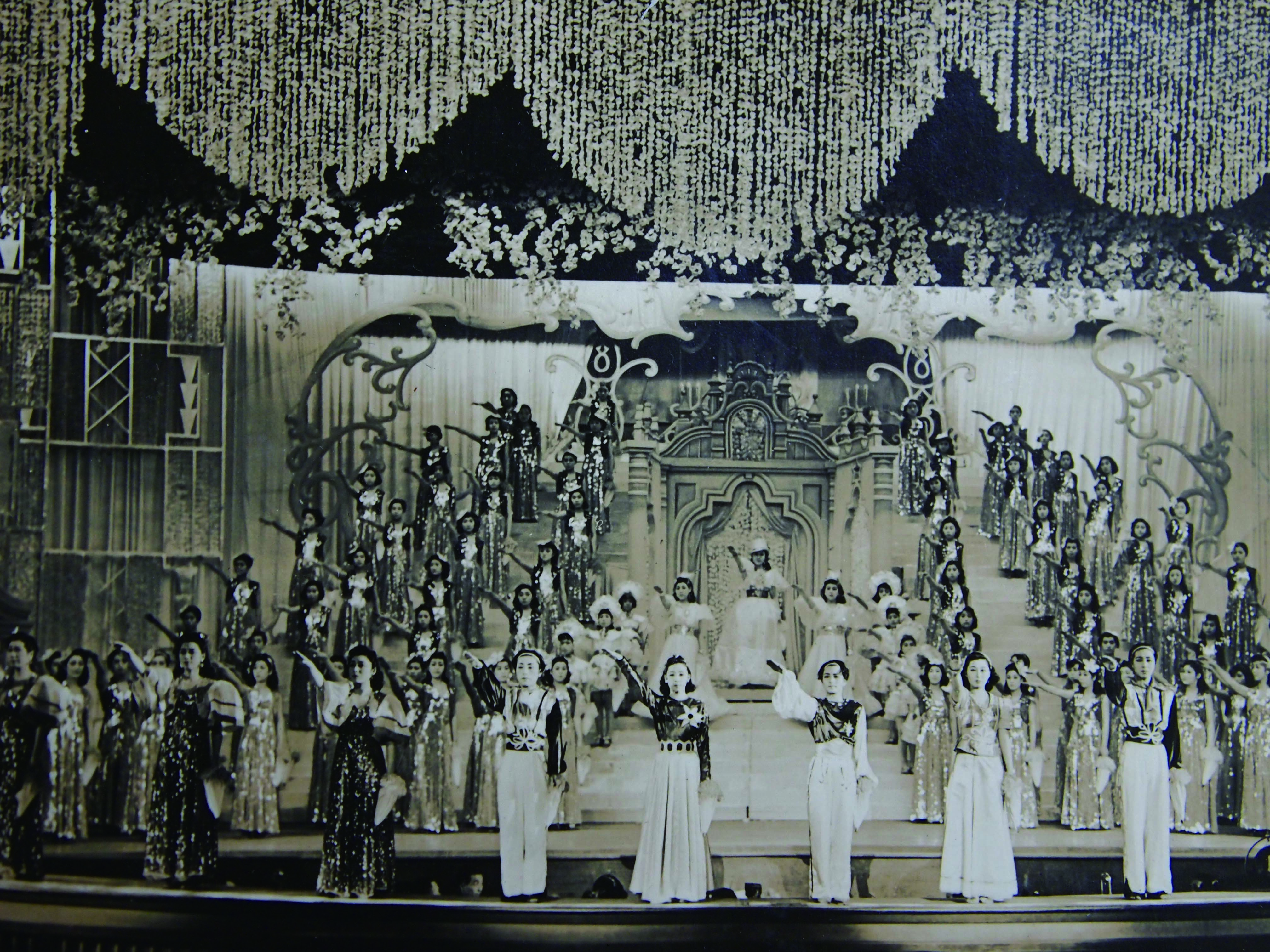 And in 1945, they staged a revue just one month after the end of the war, which healed and encouraged the people. The popularity of the revue grew sharply and outpaced the prewar days thanks to Emiko Akidsuki and Chizuko Ashihara, the "Golden Combi", who were great hoofers, and Machiko Kyo, who, known for the dramatic dancing and beautiful appearance, became a film actress.

In 1950, the performance at the Ayameike Theater in Nara Prefecture was also started.

In 1965, in response to the invitation from the Ministry of Culture of the Soviet Union, OSK performed for the first time in the Soviet Union as a Japanese revue theater company. The shows by 45 performers received great praise in Moscow by making 12,000 people excited despite verbal and cultural differences. 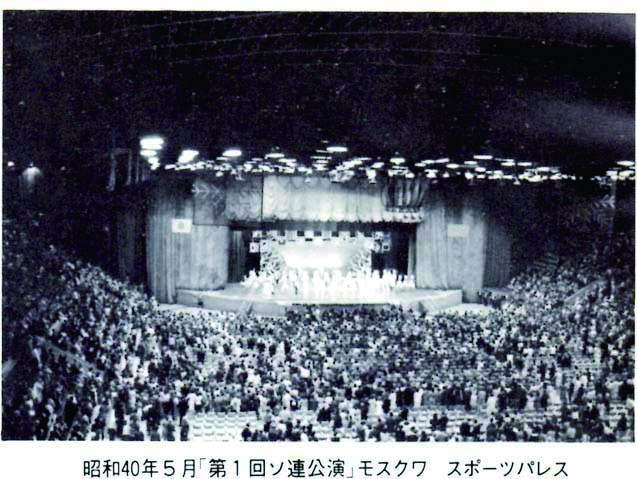 Following this success, the second Soviet Tour was held in 1967. Since then, OSK has actively performed in foreign countries including Poland, USA, Taiwan, Hong Kong.

In 1970, OSK was renamed as "OSK Nippon Revue Company". In 1971, it became affiliated with the Kintetsu Group and its headquarters moved to the Ayameike Round Theater operated by the Kintetsu Kogyo. 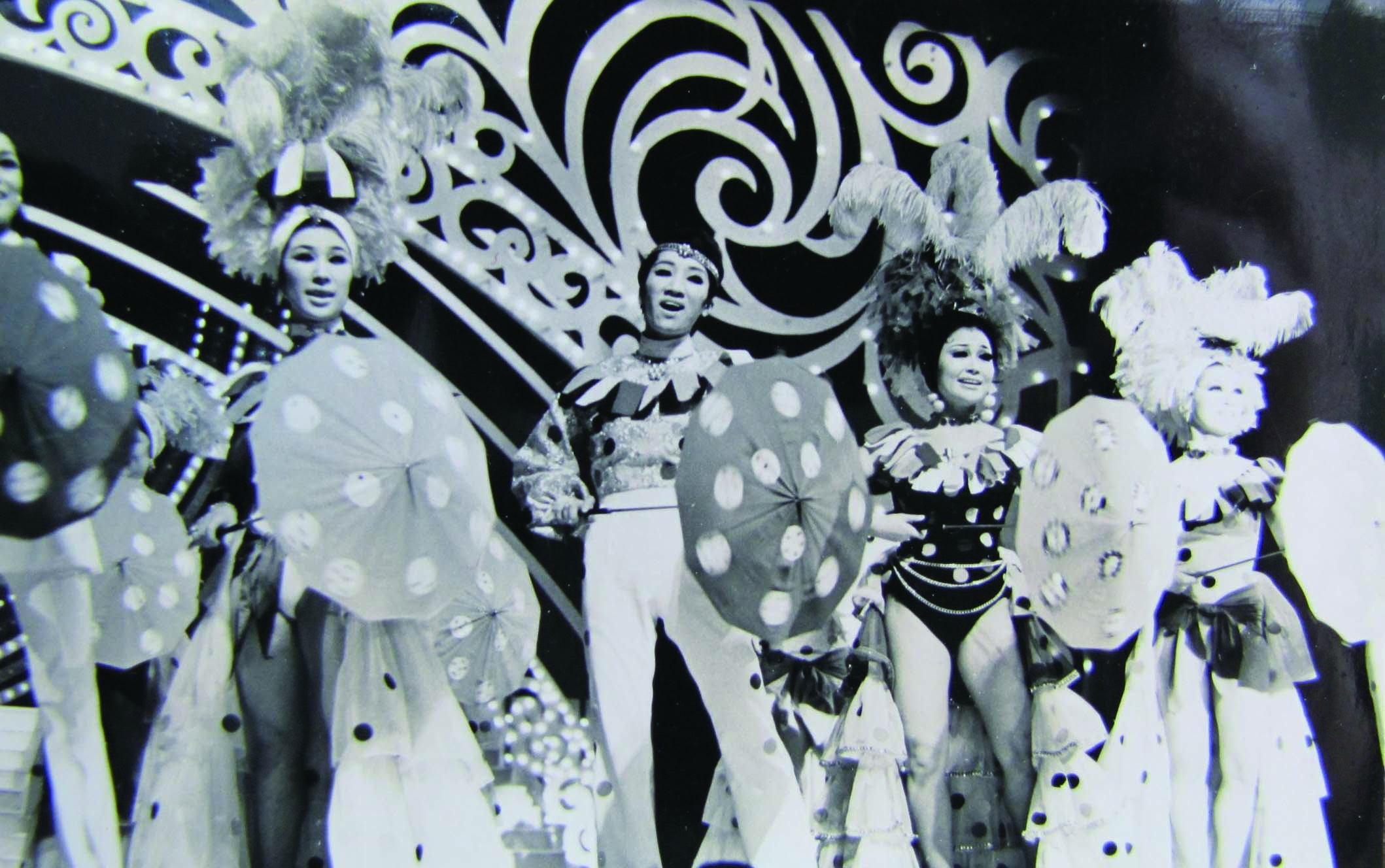 Under the Banner of Kintetsu

In 1987, which happened to be its 65th anniversary, the celebration performance at the Kintetsu Theater in Osaka, "Yang Kuei Fei", produced by Nizaemon Kataoka and directed by Gato Kataoka, gained much attention.

At "ARABESQUE", which was performed as a 70th anniversary performance in 1992, big group tap dancing by a choreographer invited from Broadway demonstrated the excellent skills of OSK dancers. This performance was much applauded at each venue such as Osaka, Nagoya and Tokyo.

At the end of the Tokyo performance in celebration of the 80th anniversary, in June 2002, support from the Kintetsu was suddenly terminated, and in May 2003 OSK Japan Revue Company was forced to dissolve for the time being.

However, the revue company members launched "The Association for OSK Survival", and in August the same year, the "Enthusiastic Revue Re-BIRTH" was performed at the Kintetsu Theater. Ever since, efforts have been made to inherit the history and tradition of OSK.

Their wish finally came true. In April 2004, they staged "Spring Dance" composed of "Sakura Blooming Country" and "Renaissance" at Osaka Shochikuza Theater, their birthplace, for the first time in 66 years and announced OSK’s rebirth.

In November 2007, the performance at Minamiza Theater, Shijo, Kyoto, was realized in 52 years. Since the following year, performances there have been held regularly every summer, with the performances at Shochikuza Theater held every spring.

On the other hand, they vigorously performed various performances and won the Osaka Cultural Festival Grand Prix with "Bandit!", which was performed in May 2010. In September 2011, the first performance at the Mitsukoshi Theater in Tokyo was also successful. 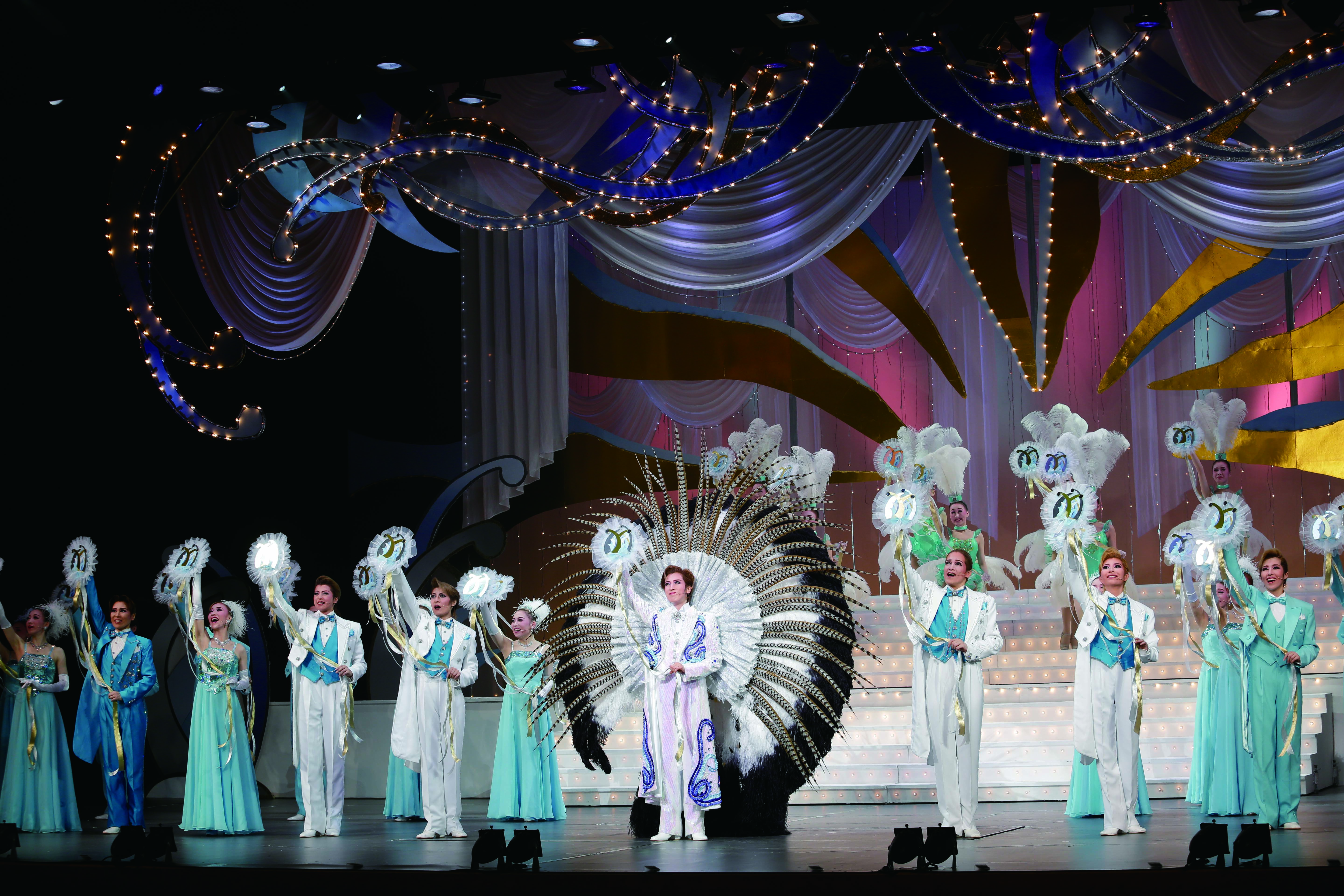 Towards 100th Anniversary, Towards the Future